Bare it all sweat it out 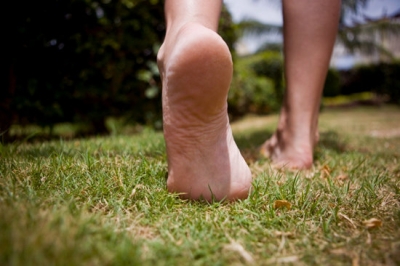 There is no joy like attempting the ground with your bare feet, but it can take up to a year to get physically fit to run without shoes, advises Dr Gladson Johnson.

Outdoor sports have taken on a new avatar over the past few years and are slowly gaining momentum through various forms like cycling, swimming, hiking, rock climbing, trekking, etc.

Running has, by itself, hit a new dimension. The advantage of running is that it can be taken up by people of all age groups and gender, irrespective of their prior experience in physical activity or running.

One of the running strategies which has hit the current running circle is bare foot running. Barefoot running is the natural form of running which our ancestors practised and has a lot of health benefits. Among which are:

Amateur and experienced runners at large volumes have also switched on to either barefoot running or minimalistic running (a running style in which a thin, non- padded glove-like foot ware is used instead of a normal padded shoe).

But the question is, is barefoot running really safe? Does it give the benefit that it claims it does? Are there any precautions to be taken before doing it? What are the adverse effects of barefoot running?

The real truth is that it is indeed safe and makes running much more efficient and effortless than running with shoes. As human beings, we have evolved to this extent purely because of our survival skills and running was the prime survival tool of the ancient man who traversed over all odd surfaces of this planet to stay alive and to provide him with food.

And our ancestors were indeed barefoot-runners.But today, it doesn’t mean everybody can head start into barefoot running and become an expert. The reason for this is lifestyle — we rarely go barefooted even inside our homes. We are most comfortable in soft-cushioned floaters and shoes than we are on our barefeet.

Hence what does it take for us to become a barefoot runner? We need to ‘evolve’. We need to train our normal feet to eventually take up the load to run. Our body needs to accommodate the new changes which we are trying to implement gracefully.

Hence, one needs to perform barefeet walking for at least three months, an hour a day, before going barefeet jogging or running. Initially, blistering of the foot is common and some amount of pain in the adjacent joints like the knee and hip is also expected to happen.

When the body has overcome the initial friction with the accommodation of barefeet walking, it then becomes simple and leads the way to jogging barefoot. This is a very crucial phase since all the muscles of the legs start working hard to absorb shock at the nearby joints, causing them to become tighter.

Individual muscle stretching for the legs is a must. The overall period, from the time you start to train your foot to the time your body is ready for the new form of running, is approximately one year to one and a half year’s time.

So there you have it. There is no short cut to it, but to pay its price of time and sustained efforts.

More in this category: